Where do I begin?

I have always been fascinated by the light.

As a child, I recall watching the glow of Sunday afternoon rays as they filtered through my mother’s bedroom window. I was entranced by the dust motes that seemingly danced in those luminous shafts.

As I grew older, I observed that the characteristics of light varied from season to season, according to the time of day, or in relation to my position. The light near the ocean seemed thicker as if there was just as much salt in the air as in the waters below.The light in winter was so weak and pale compared to the late-summer haze thick with the sound of katydids and heat-bugs.  Morning light is fresh like a cold drink of water but the light of late afternoon is soft like a comforting hug.  It is an attentive mother tucking us in before we bow to slumber and dreamland.

As I started setting up house, I paid strict attention to the need for ambient light and ferociously fought my husband over my desire to have the light over the kitchen sink shining at all times of day and night.  It is impossible for him to understand how it helps define the area and gives depth to items arranged on the counter. Awakened in the middle of the night, it is a beacon of safety and in its comforting glow says, “You’re okay. I’ve got you.”

In my classroom, I replaced the sterile utilitarian glare of fluorescent light with lamps strategically placed around the room.  I kept the shades up and let the natural sunlight stream in and chase the darkness from the corners.

Impressionist painters were also captivated by the ineffable qualities of light and attempted to capture its magic in their brushes.  Monet’s canvases literally vibrate with the energy of its power.

So, it should come as no surprise that as president of our teacher’s union during a particularly stressful and dark time, I closed each message to my members to “shine on.” I didn’t want them to close up or shut down in the face of adversity.  To me, “shine on” was an invitation to stay strong in the face of the gathering storm clouds. It is very hard to be frightened when standing in the light of day surrounded by glorious golden beams.

When I retired, my colleagues and friends presented me with a gaily colored banner to hang in my new home.  In beautiful bold letters it shouts, “Shine on!”  I hung it on the gate to my patio garden where I soak it in as I come and go.  It reminds me to bring light to banish the darkness wherever I am and to stay strong in the face of adversity.

Before I moved to New Hope, I put together a playlist of songs that lift me up, that shed a little light in my darkest hours, that make me smile.  I entitled that playlist “Sunshine.”  It seemed fitting enough; one of the things that drew me to the apartment I chose was the light and airy feeling that I had the minute I walked in the door.  The first selection in the queue was “Let the River Run” by Carly Simon — one of my favorite artists.

I googled a Unitarian Universalist church in my new neighborhood.  There were two, but I made my choice based only on the photographs of their building with the light pouring in the windows and their stated mission of seeking social justice found on Facebook. I would give it a try and see how it went. Having been “unchurched” for several years now, this was a giant leap for me.  I wondered how this would go and questioned whether I would fit in there…but I went anyway.

As the service began, the gentleman at the lectern welcomed all newcomers to worship, saying, “You have chosen to be here today and our worship would not be the same without you.”

And, if the hairs on my arm weren’t already standing on tip-toe, he then turned the service over to a fellow lay leader who introduced the meditation music, “Let the River Run” sung by Carly Simon. The very same lead song on my “Sunshine” playlist.

What is this phenomenon?

Serendipity.  Some define it as “A happy accident.”  Others, “A blessing.” Webster’s defines it as  “the faculty or phenomenon of finding valuable or agreeable things not sought for.”

A few weeks later, I found myself alone on a train feeling pretty low. Despite all my hard work to find a job in my new community, I have faced only rejection. With nearly 75 resumes out there, I was sure by this time I would have landed a position. I had been close a couple of times, but that was little comfort right now. As I looked out the windows, wondering how I would face my friends if I had to return a failure, I noticed we were traveling through a pretty rough neighborhood.  Many building were in various stages of disintegration and there was graffiti everywhere. Hopelessness hung in the air around me like a shroud.  My heart filled with compassion for the children growing up in the shadow of all this decay. I could feel their despair — because I was aching with disappointment too.  At that moment, I certainly wasn’t standing in the glorious sun. My soul was dark and I was fearful of the future for them…and for me.

Just then, I saw it.  Like a beacon, some seventeen stories high above the sad scene below, someone — some amazing artist — had painted the word “SHINE” all down the side of an apartment building. Its letters radiated in all the colors of the rainbow and I could feel within my core that admonition not to cave to despair, but to remain steadfast in the face of all the disappointment, uncertainty and rejection I was feeling at just that moment.

Serendipity?  A happy accident?  Or a blessing?

Like the song on the radio that was “your song,” or the cardinal in the tree when your loved one passes, these moments of illumination can take us from the depths of sorrow and lift us to the highest heights.  Does it matter what we call it?

Perhaps, we should just graciously accept this precious moment when the universe seems to part the curtain, reaches out to us — and like the comforting glow of the light over the kitchen sink –whispers, “It’s okay. I’ve got you.” 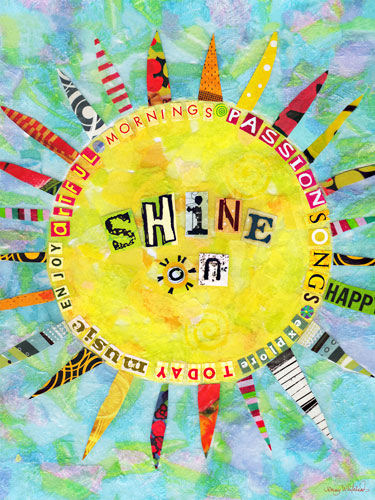 If you like this design, you will find it available at this site…support the artist please! http://www.wallstickeroutlet.com/wall-decor-detail.php?RecordID=108357

An amazing choral arrangement of “Let the River Run.”